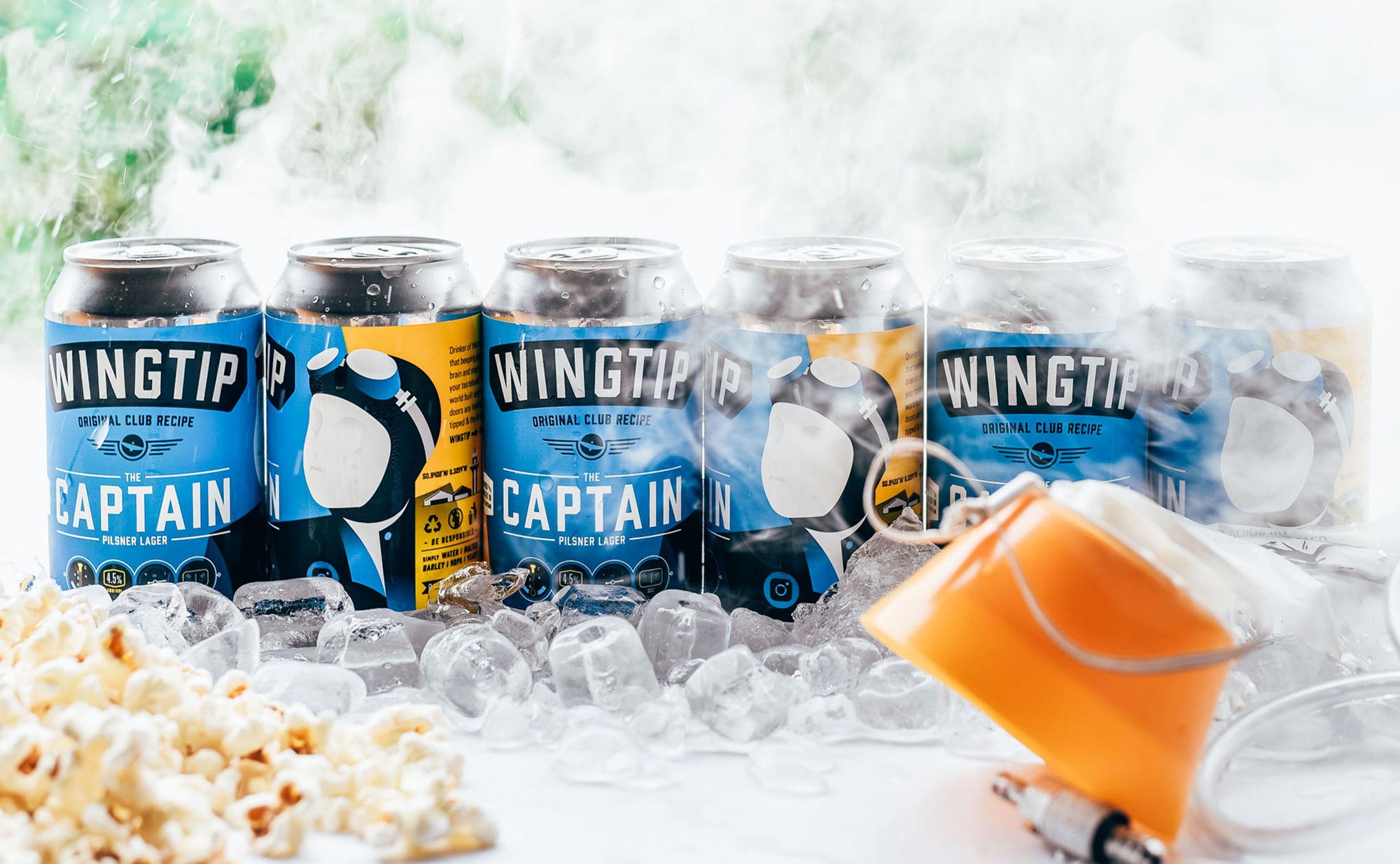 Onwards and upwards. An appropriate trajectory for a brand imbued with the characteristics of flight and travel, not that the Wingtip Brewing Company is going anywhere per se.

But the central premise of their brand runs through everything  – from the iconography on the bottle labels to the target audiences and the outlets where the beer is sold.

“We started in 2015 with a real vision,” says director Simon Tripp. “We wanted to have a strategy that would have the brand as a cornerstone, integrated with everything we do, because that would set us apart.”

The travel and adventure theme was inspired by his family’s fondness for air travel and sharing travelling experiences. “We wanted to reflect that in a premium beer brand,” says Tripp. “We looked to capture the essence of how the world has become a smaller place through package holidays and more affordable air travel, and how young people want to explore and have different experiences. We wanted to be in tune with that city break and adventure travel demographic.”

“[…] young people want to explore and have different experiences. We wanted to be in tune with that city break and adventure travel demographic…”

Tripp travelled around independent lager breweries in Europe to develop his ideas on taste, before partnering with a small British brewery. Once they had got the beer right, they explored design concepts. “It was really important that the brand was memorable, distinctive and made you smile,” says Tripp. “So we wanted a strong visual aesthetic to make the product stand out on the shelf so that people would actually want to pick it up and have a look.”

Tapping into the right market

In line with the travel theme, the beers have names including Wingtip itself (the main identifier brand), The Captain (the best-selling beer) and Frequent Flyer. The labelling and related promotions feature aviation-related visual language such as airline insignias and flight controls.

There’s a nostalgic feel, with art deco design and references to the history of flight. That rich design language resonates with the target audience, Tripp says. And textured labelling makes the bottles very tactile. Meanwhile, research showed that the nostalgic element is appealing to women so the designs are deliberately gender neutral.

In terms of the beer itself, Tripp didn’t want to compete in the so-called craft beer market. “We wanted a brand which would tap into travel retail where the price positioning is premium – up to £6 a pint at on-sales,” he explains. “You don’t find us in cliched craft beer outlets. We’re in premium, top-end places like Harrods, Cahoots, boutique hotels and Virgin Atlantic lounges, where we are often the only beer. And we are always open to changing the colour palette of the design on our packaging to match an airline’s branding.”

“You don’t find us in cliched craft beer outlets. We’re in premium, top-end places like Harrods, Cahoots, boutique hotels and Virgin Atlantic lounges, where we are often the only beer.”

The important thing has been to engage a younger audience, which, celebrity endorsement aside, he thinks tends to look to each other for which new brands to engage with. “They find comfort looking through their friends’ window on life,” Tripp suggests; a reason why Wingtip have followed other brands in giving product to vloggers, seeing it as cost-effective promotion through product placement.

With social media constantly reinventing itself, Tripp is conscious of the challenge of how to use that plethora of technology to bring out the best in the brand. “Traditional ways of doing business, for example email, are more challenging because younger people communicate differently. They prefer to communicate through WhatsApp, for example, and use social media to find out about new products.” 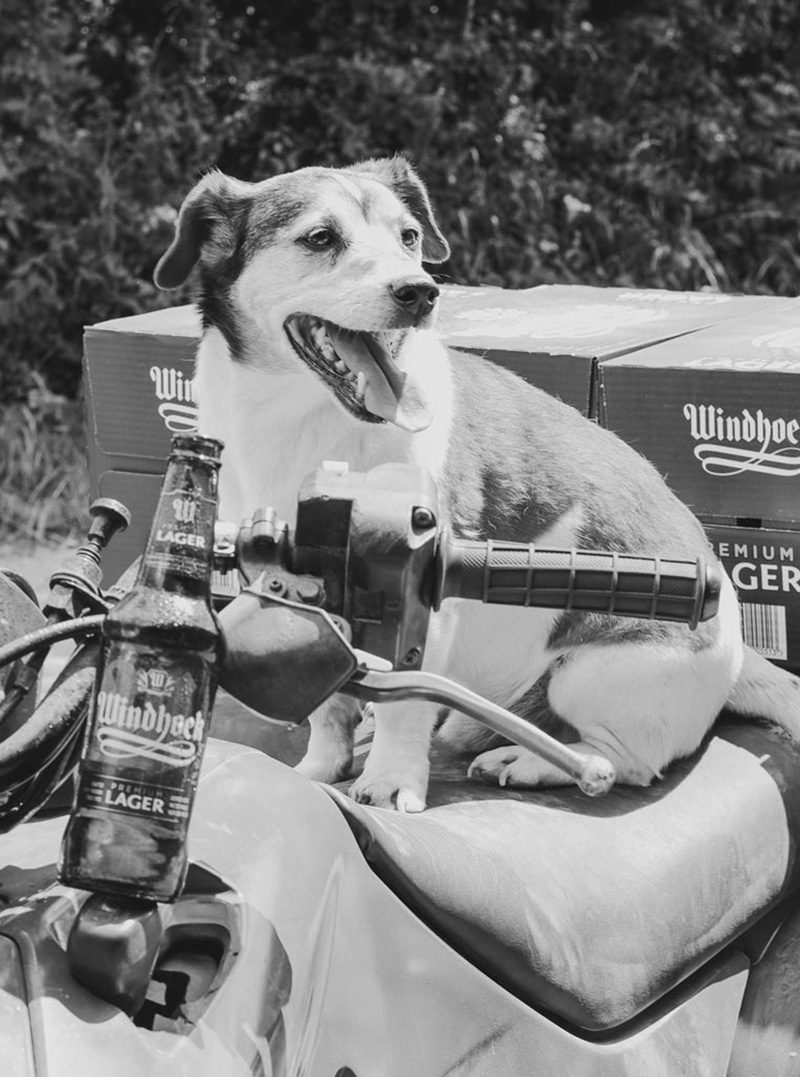 Keeping up with change

An irony in that Wingtip’s nostalgic design language is arguably unplugged from the contemporary digital world. “But that doesn’t mean we can be unresponsive to innovative platforms,” says Tripp, who admits to being in “a state of flux” in terms of which ones work best. Instagram, where Wingtip have 10,000 followers, certainly works well with such a visual brand. “It doesn’t demand too much from the consumer in terms of engagement, either,” adds Tripp.

But it can require quite a commitment time-wise for the brand, which is why Wingtip have decided to outsource social media as well as their the marketing, branding, packaging, website and merchandising (the sale of branded clothing generates revenue beyond the core product).

Given the speed of change, Tripp feels brand values don’t necessarily have to be resolute. “You can revisit your brand values for myriad reasons: environmental, cultural, and technical,” he maintains. “Audiences are becoming more sophisticated in terms of how they purchase. And I suspect brands might have to adjust their brand values to address that.

“You can revisit your brand values for myriad reasons: environmental, cultural, and technical…”

“EasyJet, for example, were always very price driven but evolved into much more of a lifestyle brand; it’s now a platform that we really admire. It’s all about ‘hop on and experience a new city’, using beautiful imagery of destinations and people exploring new places. They’re moving away from the price-driven model to a more branded experience.”

And ‘experiences’ are what people are looking for, he argues. “We will keep pushing immersive experiences on social media and as we push forward into travel retail we need to come up with quirky, disruptive mechanics to engage with consumers.”

Being disruptive to stay relevant

So he thinks a brand needs to be disruptive, perhaps self-disruptive to some extent. “Everyone wants everything now and that’s put huge pressure on brands to stay relevant,” Tripp argues. “Complacency is a potential threat for a brand which has become established, a degree of vulnerability which wouldn’t have been so significant before the internet. You have to keep moving, embrace technology and respond to trends and the desire for consumer convenience, break out of yourself and interact with consumers, and even challenge consumer thinking.”

He thinks brands like Tesla, Airbnb and Uber have done well in this respect. “They have come from nowhere and shaken up the market, and they continue to be disruptive to stay relevant.”

In his market, he cites Brewdog as an “inspiration” to other brands. “The whole premise was being renegade and rebellious and political and controversial and they have done that really well, through random pop-ups and clever PR stunts and crowdfunding. Whether the crowdfunders got anything back, I don’t know, but they feel part of the club, part of the journey. Brewdog have really engaged with their audience of the stereotypical hipster, to the point where they became cult-like. I have a lot of respect for them.”

“Brewdog have really engaged with their audience of the stereotypical hipster, to the point where they became cult-like. I have a lot of respect for them.”

Brewdog also benefited from having their own retail outlets, says Tripp, and he would like to follow suit, possibly with tap rooms where customers can also buy merchandise or model aeroplane kits. “Maybe we could open a bar in London or Brighton,” he muses. “We are constantly looking at potential spaces. Last year, somebody offered us a redundant Boeing 737; if we could find the land to put it on, we could convert it into a bar which has overnight accommodation. That would give us the potential for more creative consumer experiences, for example using the fuselage for ‘pop up’ events.

“And we are considering having a ‘radar’ app to help people find their nearest stockist and create loyalty at the same time, perhaps including some kind of travel-themed game. That will reinforce the travel philosophy of the brand.”

But there’s an interesting paradox in trying to sell more to the actual airlines and travel hubs: the prevailing wind to reduce passengers’ alcohol consumption and the weight that planes have to carry. To address both issues, and at the same time increasing the margin for the airlines, Wingtip aim to be first brand to downsize the size of beer cans, offering beer in 250ml instead of 340ml cans as well as wine in 150ml cans. 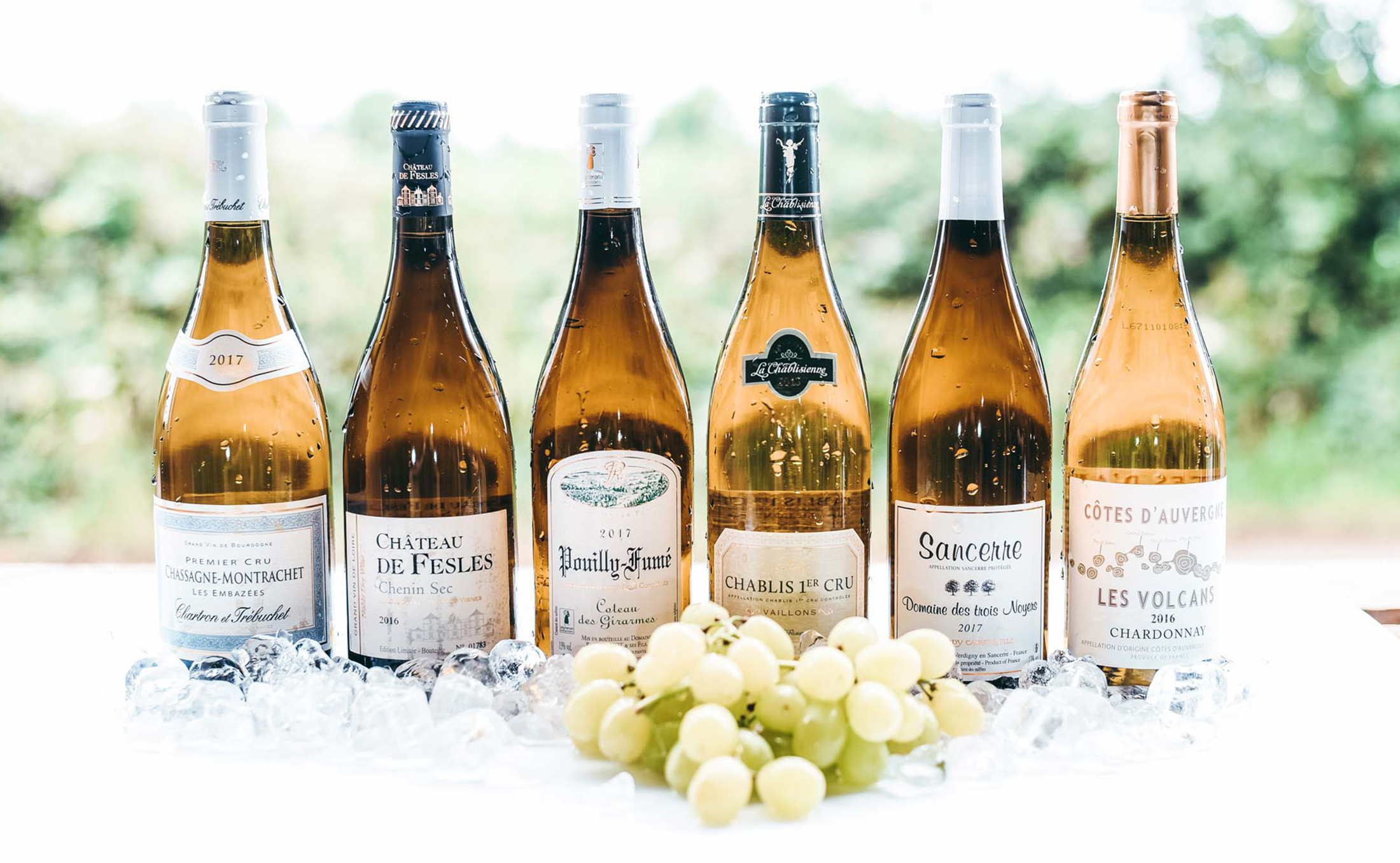 Wine? Indeed, Wingtip have gone far beyond lager. In addition to their own brand, they now distribute imported beers, artisan spirits, sodas and “boutique wines” for importers and other brewers, and are open-minded to new types of drink. “We’ve been looking at introducing a combination of beer and champagne – and using plant flavourings like hibiscus. And we could have our own range of wine in tins, which would be very much in keeping with the brand. We are also talking about doing low-alcohol and low-calorie drinks, which is a growing market.”

“We could have our own range of wine in tins, which would be very much in keeping with the brand. We are also talking about doing low-alcohol and low-calorie drinks, which is a growing market.”

And he’s pleased that Wingtip avoided positioning themselves as a craft beer producer. “That market is saturated and I’m afraid to say some are already falling by the wayside,” he says. Meanwhile, Wingtip have recently entered the take-home market, with its product available through the likes of Amazon. “It’s important to be a strong take-home product,” says Tripp. 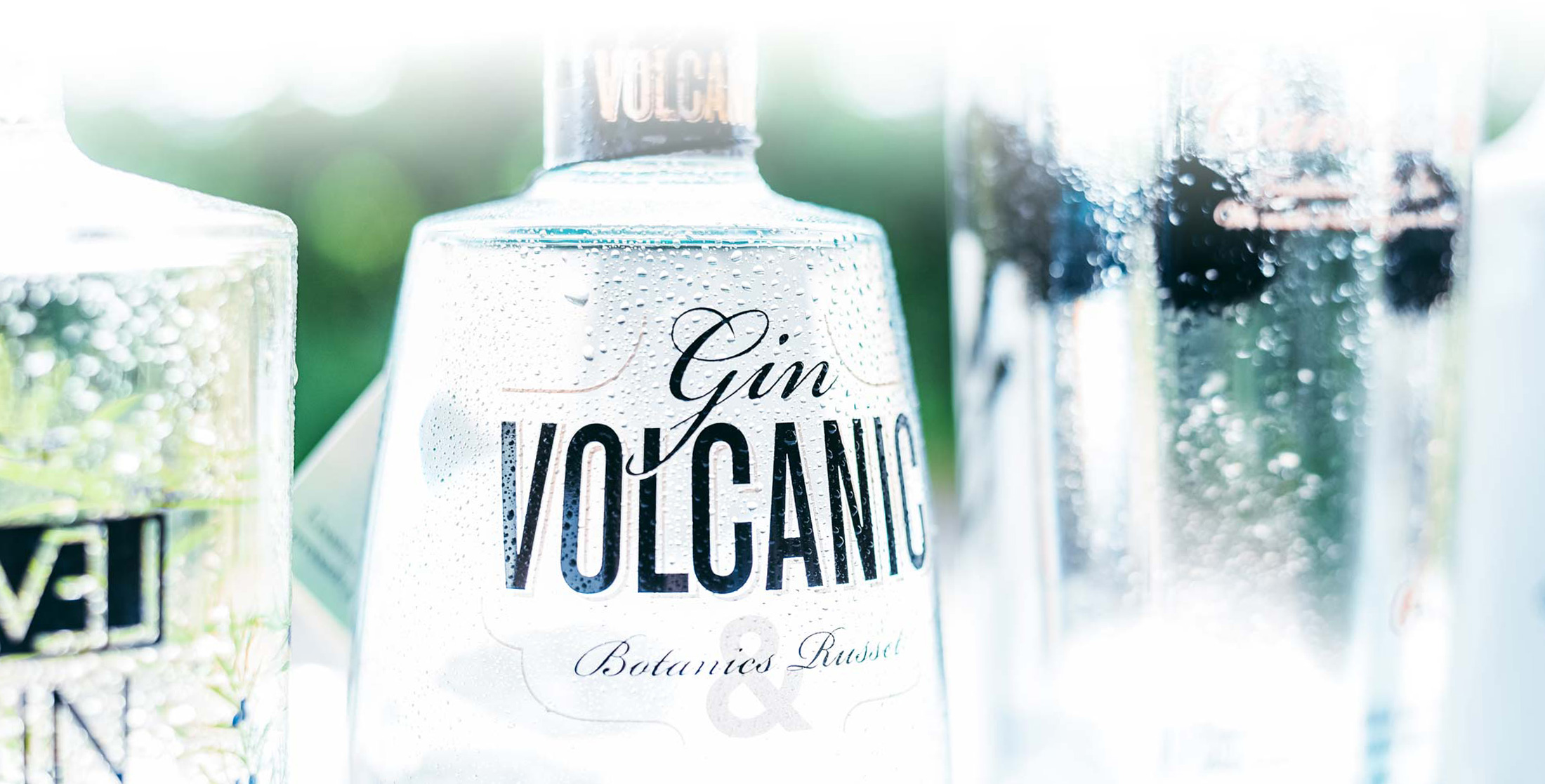 While it started as a family business, independently funded and owned by Tripp and other family members, Wingtip have been considering whether to bring external investment on board. They considered crowdfunding but so many other breweries have used that method, they ruled it out. Private equity could have helped take the business to the next stage of becoming a global brand, particularly in travel retail (duty-free shops and airport food service outlets), but instead, the Tripps decided that Wingtip should be acquired by family-owned drinks importer Morgentrot, with the co-founders continuing in their roles.