SEAMS Beauty – ambition to be THE company

SEAMS Beauty – ambition to be THE company 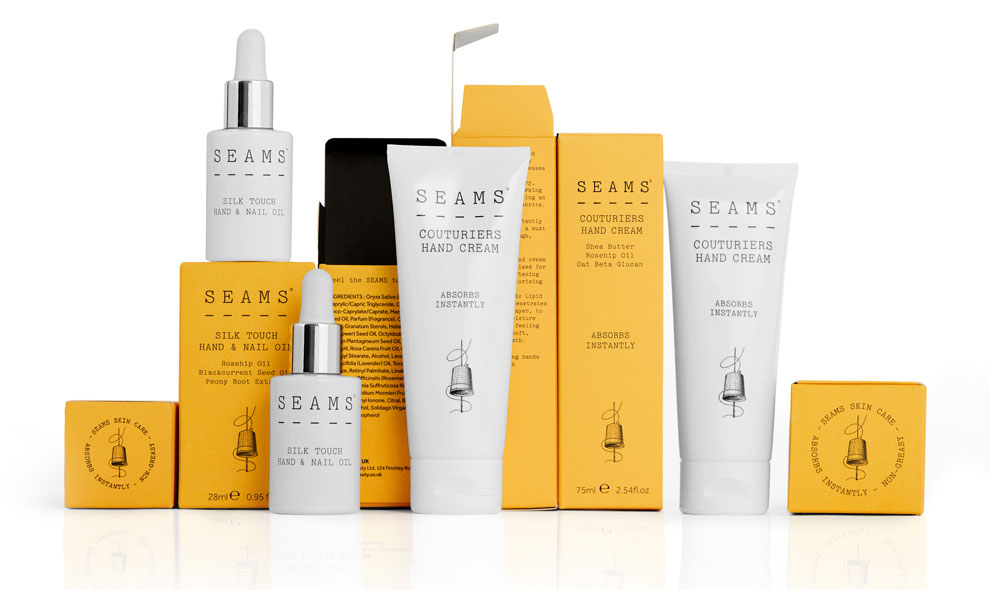 Having just walked past a busy branch of Joe and the Juice, Karen J Gerrard is quick with an answer when asked to name an impactful brand whose success she would love to emulate. “They’re gone from one juice bar to having 300 in sixteen countries,” she says. “They offer something that people want and need, the product is consistent and you can easily recognise from the signage and imagery what it is. Those are key characteristics of an effective brand.”

“They offer something that people want and need, the product is consistent and you can easily recognise from the signage and imagery what it is. Those are key characteristics of an effective brand.”

And they’re the characteristics that Gerrard is emulating for her own brand, SEAMS Beauty which she launched in 2013 with her hero product SEAMS couturiers hand cream. Her goal couldn’t be clearer. “I want to SEAMS to be a global household brand. I want it to be sold everywhere, mainland Europe in particular,” she explains. “We have had online orders from all over the world but we want SEAMS to be in shops as well, so we are also focusing on building relationships with retailers.”

Recently getting the product into a multiple in the US that has hundreds of stores has been a big step towards that goal. 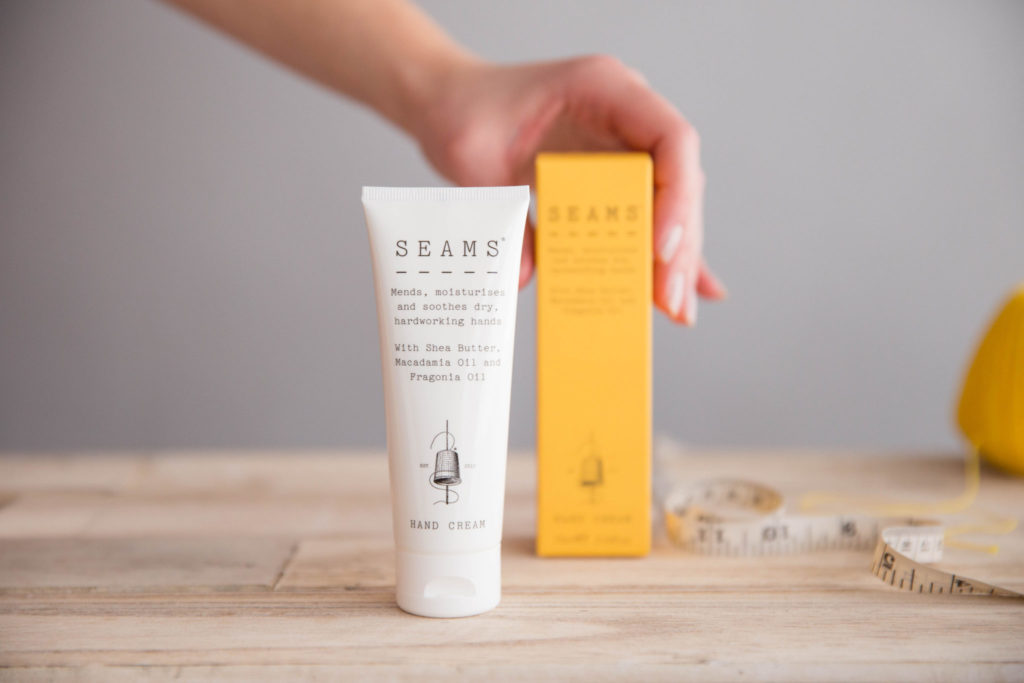 The idea for the product came when Gerrard’s hands repeatedly got cut, sore and dry from her use of needles, hot irons and water during a millinery course at the London College of Fashion. She looked for a cream that would moisturise and help heal her hands, but which wasn’t greasy, didn’t sting or transfer onto the fabrics.

Unable to find one, she decided to make her own, working with a pharmacist on the formulation, and then going on to have it made by a cosmetics factory – a UK-based one as Gerrard wanted to support the British manufacturing.

With a background in fashion design, wholesale and retail – including having run her own fashion accessories store – Gerrard aimed the product at seamstresses, couturiers, make-up artists and models in particular. The product, launched at London Fashion Week, was immediately featured in the beauty pages of You magazine.

Her connection with sewing inspired the name of the brand, with the logo and imagery clearly reflecting that connection.

Inadvertent market research suggested to Gerrard that she was on the right track. “When I talked about hands at dinner parties, what I was not expecting was that people would hide them on their laps. I would pass the cream round the table and after trying it, they would stop hiding them as they felt and looked so much smoother.”

“I would pass the cream round the table and after trying it, they would stop hiding them as they felt and looked so much smoother.”

What sets the product apart, she says, is that it’s the only brand of its kind specifically orientated for sewing, which, crucially, gives people a reason to buy into it. The cream has found a ready market in sewing and haberdashery shops, while more unexpected adopters have included cooks, doctors, gym users, gardeners and even motorcyclists and ice-skaters. Anyone, in fact, whose hands get wet a lot, leading to dry skin.

Gerrard’s idea of “practical made beautiful” has also helped to generate word-of-mouth interest among people like make-up artists, with the result that the product has been used backstage on programmes like The X Factor and Dancing on Ice. 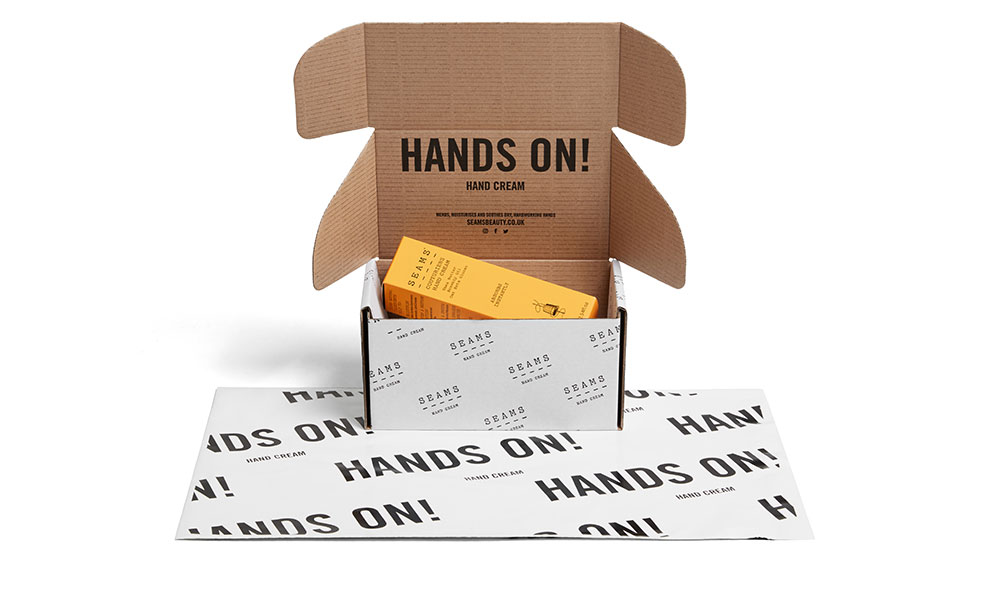 When setting a price point, Gerrard based it what needs to go into the product rather than the other way round. The cream has ten natural active ingredients, some of which are organic; it doesn’t contain animal derived ingredients and is not tested on them either. “I didn’t want to compromise on those criteria, even if that meant charging more,” says Gerrard. “Even so, it’s an accessible price; more expensive than perhaps Burt’s Bees but cheaper than, say, Clarins.”

“I honestly didn’t think that there was a risk that it might not work,” she recalls. “I knew there was a niche in the market. You have to have confidence that your idea will work, and in my case I was proven right very quickly.”

The biggest challenge is getting the consumer to try a new product, and to this end, though much of Gerrard’s marketing has been word-of-mouth, coverage and testimonials on social media have also proved vital. “We are finding micro-influencers who have real power as they are typically women who buy it and use it,” she explains. “We had one influencer who demonstrated how she was using SEAMS for hand massage.”

“I knew there was a niche in the market. You have to have confidence that your idea will work, and in my case I was proven right very quickly.”

But it’s important that brands use social media to have conversations, rather than just one-way self-promotion, says Gerrard. “The younger generation especially have been brought up with social media so they are very savvy and get straight to the point very quickly, which translates into having to give quick responses when you’re having conversations with them. It’s all about community and culture and using imagery in particular to give an understanding of the brand, as opposed to ‘selling’.”

The most useful social media channel so far has been Instagram but Gerrard also uses Twitter, LinkedIn, Facebook and YouTube. She produces podcasts, promotes the product on TV shopping channels and writes features about hand care for beauty magazines, which has led to her gaining somewhat of a reputation as ‘the hand care queen’.

But underlying this are the product’s fundamental qualities. “Companies can throw millions at a brand but at the end of the day if the product doesn’t do what it says it won’t last,” says Gerrard. “The main brand value has to be honesty. Everything we say is real, there are no fluffy adjectives, it’s all totally relevant and true. We use only natural ingredients, the cream isn’t greasy, and it really does help heal sore skin. But the proof in the end is whether customers trust the product, and once someone tries it, if they come back so you have lots of repeat customers.”

Though the hand cream will remain the hero product, she is working on developing a full collection, including Satin Skin hand and nail oil, and various body creams, all intended for particular purposes. “People buy for a reason so if it is going to be distinctive, a healthcare or cosmetics product needs to have a purpose,” Gerrard maintains. “I continue to ask a lot of people ‘what are the problems with your skin, what do you need?’ For example, some want creams they can use on scars.”

Being able to demonstrate environmental credentials has become a pre-requisite for a brand, regardless of whether it’s sold b2b or b2c. SEAMS are planning to make the carrier tube from sugar cane, for example.

But although the brand is relatively new and can claim a point of difference in a crowded market, Gerrard doesn’t see it as ‘disruptive’. “Everything moves at such a fast pace but a brand should stay relevant by remaining true to its founding values: this is what it is, this is what it does.”

“If you have really researched your market and have a vision, then stay true to it. Keep the concept simple, straight to the point, and very clear so the consumer knows exactly what it is.”

“If you have really researched your market and have a vision, then stay true to it. Keep the concept simple, straight to the point, and very clear so the consumer knows exactly what it is. And have a brand guidelines book to make sure the use of the logo and other visual collateral is consistent.”

Gerrard adds: “Another lesson I learned is: if you are using experts listen to them. Everyone can learn from others, so ask people for their opinions and advice and give back as well, from your own knowledge and experience.”